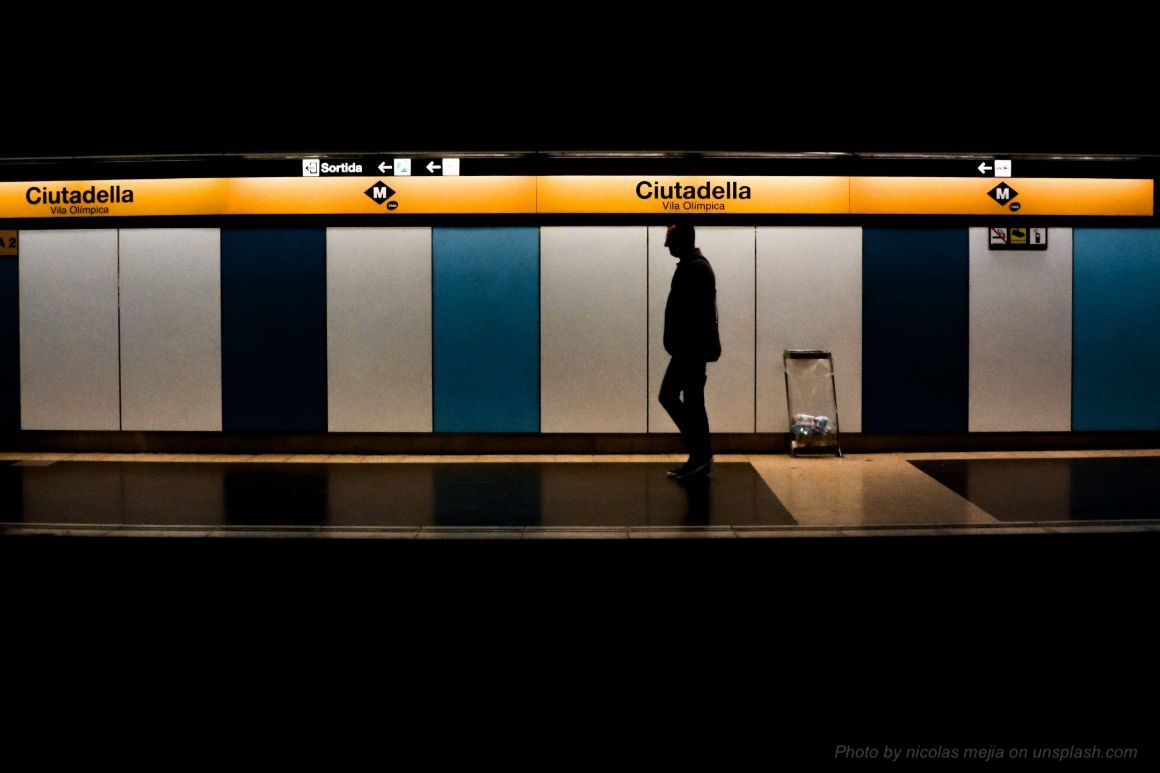 Travelling by public transport in Barcelona is restricted to essential journeys only as the city maintains Covid-19 restrictions.

Local transit agencies now use their communication budgets urging people to stay at home. Ridership declined as much as 95% on some days. During the two-week period of total lockdown between March 30 – April 12, even less reported travels were made as only essential workers were allowed to leave their homes.

In line with new government rules, transit companies are obliged to keep their vehicles occupancy at no more than 1/3 of capacity to ensure social distancing.

Here’s how the situation looks like for each operator :

FGC indicates an average 93% drop in passengers between March 9th to April 23rd, compared to the same period last year.

The average daily validations are at around 25.000, with service supply at 60% during rush hour, and 40% throughout the rest of the day.

There has been a 49% increase in passengers in the weeks 13 – 26 April compared to the two weeks of complete lockdown between March 30 – April 12.

FGC has an annual ridership of 87 million passengers (2018). 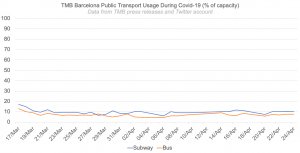 On TMB subway the capacity is at 60% on weekdays, with peaks to 65% in the early hours of the morning. Buses run at around 45% capacity, compared to a regular weekday.

The subway runs a fixed schedule from 5 in the morning to 12 at night, from Monday to Friday, without the regular non-stop service during weekdays.

The tramway operates at 60% capacity, with increased frequency during weekends. During the total lockdown period between April 2-14, service was at 50%.

The tramway has 2 lines with 7 routes throughout the city, and an annual ridership of 15 million (2018).

In the period March 25 – April 14, Rodalies provided service at 66% capacity during weekdays and 50% in the weekends.

As of April 27, Rodalies announced an increase in service to 71% during rush hours and 61% throughout the rest of the day.

The average ridership between March 23 – April 26 looked like as following: 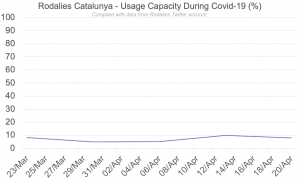 Renfe, the national railways of Spain, reported an average 10% use of of its services in the surroundings of Barcelona during March 28 – April 23: 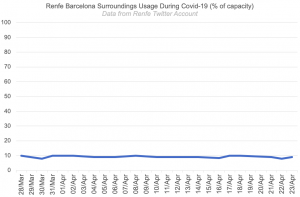 Throughout Catalunya, Google reports an 81% decrease in mobility at transit stations in the period March 6 – April 17:

Besides the changes in traffic from public transport operators, Barcelona’s biking scheme has also been stopped between March 16 until April 23 to limit the spread of the disease. The service is now open again to the public although with strict hygienic recommendations.

While passenger numbers plummeted, fare infractions skyrocketed during the pandemic, as ticket inspections and front-door bus boarding were halted.