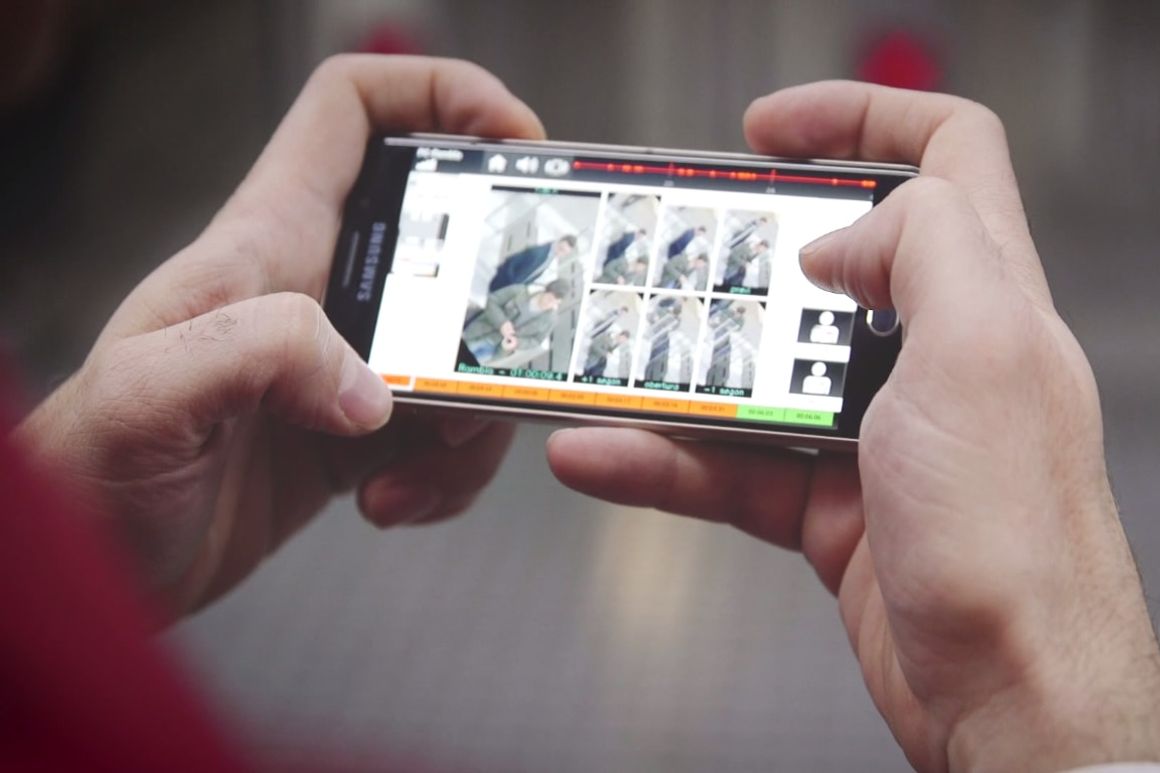 A ticket inspector checks a fare infraction alert on the real-time fare evasion detection app developed by Awaait (note: the scenes in the app are a simulation played by actors)

Overcoming the challenge of manually analyzing video feeds from security cameras is one of the biggest tasks for companies and organizations that use video surveillance networks on their premises.

Each surveillance network can include a number of cameras that generate a high volume of video data. This data is valuable to gain insight into the surveilled area, to understand human behavior, or to detect fraudulent incidents.

Ultimately, however, the overwhelming volume of data is simply beyond the practicalities of human observation. The majority of the video is not checked. This does not allow for the effective, immediate detection of what may possibly turn out to be critical events.

Security agents have to spend many hours watching through multiple computer screens, and oftentimes there are not sufficient agents to review all the screens. Even when there is enough human personnel, it is highly improbable that they will be able to identify every event, security incident, or trend from all the video feeds.

What is therefore a proper solution to monitor the right frames in each video for every situation depending on the specific need of each organization?

Thankfully recent advances in Artificial Intelligence and Deep Learning technology now allow for a streamlined and efficient manner of dealing with such large amounts of information coming from video feeds.

Deep Learning Video Analytics as such proves to be an accurate technology that contrasts with the traditional video surveillance methods. It allows for the detection, extraction, and classification of objects from unstructured video frames into a database that contains meaningful and intelligible information.

Video intelligence for improved safety at stations and access areas

One example where the application of Deep Learning Video Analytics is proving effective is public transport. With hundreds and even thousands of security cameras installed in some transit systems, it makes a difference for transport managers and for security staff to have real-time situational awareness. It enables them to react immediately when necessary and proactively avert unwanted incidents.

Fare evasion is a social issue that causes losses in billions of dollars for transport operators worldwide. In 2019, losses amounted to € 500 million in France, $ 250 million in New York’s MTA, ￡100 million on London’s TfL, and A$ +80 million on Australia’s New South Wales.

Video Analytics using Deep Learning can help to substantially reduce fare evasion at transport access nodes that use turnstiles or swing gates. With the help of video cameras installed above the gates, it is possible to monitor and analyze the flow and passing of passengers. Specialized computer-vision based software analyses the video feeds, and by setting specific parameters, it is possible to create and train neural networks that trigger when detecting anomalies such as fare infractions.

On sites that use turnstiles or sliding gates, the AI software is able to detect various forms of fare evasion such as jumping or sliding under the gates, forcing the gates, entering from the reverse way, or passing closely behind a paying passenger.

This type of system can function 24/7 with a constant level of efficiency. At the same time, after the training of the initial model is complete and reaches an acceptable degree of efficiency, it continues to upgrade and learn over time. It only gets better at detecting fraudulent incidents.

To best use its real-time capabilities, the system is configurable to send instant alerts to a mobile application on the smartphones or tablets of key personnel. In this way, they are able to intercept and check the offenders on the spot.

Such a system generates data that managers can analyze from multiple perspectives. The Deep Learning engine aggregates video analytics data over time and presents it in a statistical manner or in heatmaps through dashboards.

Transport managers can use these insights to understand their operational performance and make informed, data-driven decisions. For instance, if they find that certain sites have high fare evasion rates, they might decide to undertake extra research to know the reasons behind fare evasion and why their passengers prefer to avoid paying over compliance. Or they might directly decide to adjust fares or upgrade the technology behind the ticketing system. Alternatively, they can employ a public information campaign to raise awareness and inform the public about the issue.

Beyond day-to-day management, AI-driven Video Analytics can also help with planning for future improvements or making decisions about the geometry of a station, improving passenger flow, or deploying new technology with a more preventive approach against fare evasion.

Transport managers can use these insights to plan ahead further interventions and reshuffle their security and inspector teams for better coverage of the surveilled areas.

Creating a deterring effect through a system that works

Smooth customer experience and providing the feeling of safety in public transport for customers is a key element that transport companies must plan in their core annual strategies.

Video Analytics using Deep Learning has a powerful deterring effect on offenders that intend not to pay for their fare, as they know that the system that is put in place can detect their behaviours and that there is a high chance that security agents will catch them.

At the same time paying passengers are more satisfied and feel safer as they directly see the positive effect of identifying individuals that try to cheat the system. This helps to restore trust in an organizations’ services, and customers ultimately feel good for not being unjustly treated by having to pay for the fares while others do not.

For transport operators of all types and sizes, Deep Learning Video Analytics makes video feeds meaningful, actionable and quantifiable, expanding the capabilities of existing video surveillance assets. It makes day-to-day operations more efficient and enhances security, providing transport managers the power to closely monitor critical areas in real-time, as well as examine statistical data to draw informed business decisions on the spot and in the long-term.