Beijing subway has made available five additional unlimited electronic tickets on its subway network, which will be usable on all lines except for the airport shuttle.

With these tickets, passengers can now change lines as often as they want within a fixed time period. Tickets will be available for one, two, three, five or seven days for 20 ($2.95), 30, 40, 70 and 90 yuan, respectively.

The tickets can be downloaded on the official app Yitongxing. Since Beijing introduced mobile payment on its metro lines in 2017, the app has attracted almost 11 million registered users. 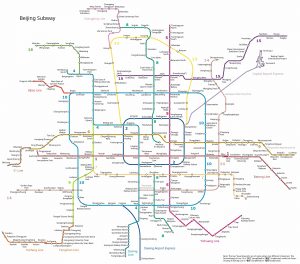 More convenient than a metered system

Up until January 20th 2019, Beijing used a metered fare system. That means that commuters could either only buy single-ride tickets or use a rechargeable card.

Now passengers don’t have to put up with waiting lines at vending machines, since the tickets are available directly through the app in QR code.

As for tourists, they will not have to worry about returning their public transport cards before leaving Beijing.

Beijing Municipal Commission of Transport stated that the unlimited electronic tickets “will bring convenience to visitors or anyone who needs to take the subway several times”.

Beijing Subway is the second longest in the world (after Shanghai). It has an average daily ridership of 10 million trips, on 27 lines- of which 19 rapid transit and one Maglev line. It has 394 stations and covers a total of 678 km in length.