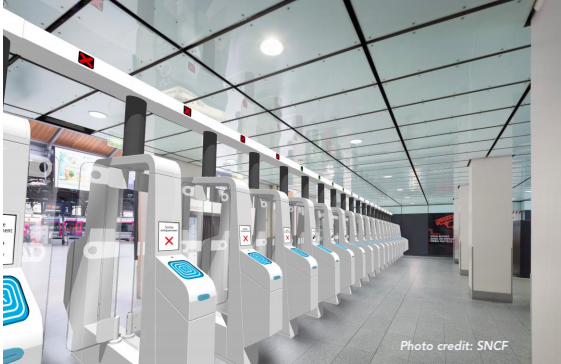 In July 2019 the Parisian station of Saint-Lazare has been the first one to receive the upgrades. According to the press release issued by SNCF, the cost raised to 14 million euros for this station, out of 55 million euros invested in total to replace 1.800 old access gates at 34 stations on its network by 2021.

The old gates will be replaced with full-height access gates similar to those already in place at the Paris Metro. This investment has been financed by Ile-de-France Mobilites, the transport authority for the Paris-area and Ile-de-France region.

Initially functional in off-peak hours from 10am to 4pm, they will gradually operate during more hours in the coming months.

The aim of the measures is to reduce fare evasion which amounts to approx. 63 million euros yearly on the SNCF networks in Ile-de-France. Valérie Pécresse, president of Ile-de-France region, added that the new gate system will also help improve security, since 60% of passengers convicted of crime or aggressive behaviour on these trains are fare dodgers.

Next to this Ms. Pécresse mentioned ongoing talks with the French government to introduce facial recognition at large train stations in France, similar to methods used at international airports.

Previously in 2018 SNCF announced the deployment of  mobile teams on trains and stations in Occitanie to tackle fare evasion.

1.600 trains and 450.000 passengers pass through the Saint-Lazare station daily.

In similar efforts to reduce fraud in public transport, upgraded fare gates are also being installed at Lille metro in 2019 and 2020.