Fare evasion – traveling without a valid ticket in public transport- is a problem for many public transit operators around the world. It undermines the viability of public transport, causes financial losses that amount to millions yearly, and leads to feelings of unfairness and lack of safety among paying passengers.

A study carried out in 2015 by Professor Graham Currie, Director of the Public Transport Research Group (PTRG), and Alexa Delbosc from Monash University (Melbourne, Australia) analysed the reasons why people fare evade.

Findings revealed that fare evaders can be categorised into 4 types, depending on their attitudes and behaviours: the accidental evader, the “it’s not my fault” evader, the calculated risk-taker and the career evader. 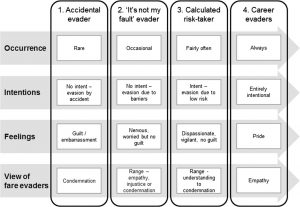 Minority of persistent fare evaders cause most damage

Results showed that in Melbourne, most of the revenue loss came from a small group of fare dodgers (65.400 people) who almost never paid for their tickets, which Mr. Currie calls ‘recidivists’. Their actions amounted for 68% of the total revenue loss in one year, or A$54m (about A$826 per person).

Public Transport Victoria, the client of the study, used the results in the implementation of an action plan to reduce fare evasion on its network. The plan included marketing activities highlighting the issue of ‘recidivists’, and more ticket checks carried by inspectors dressed up in plain clothes, which would make it harder to be recognised by fare dodgers.

In Sydney, PTRG consulted Sydney policy makers about their revenue protection methods, who reported annual savings of A$ 0m following their advice.

In a presentation prepared by PTRG for a TfL meeting in London, emerging technologies were also recommended to tackle fare evasion. One of the mentions included AWAAIT’s automatic real-time video analytics system DETECTOR. The tool, developed as part of the TRAINSFARE project, uses Artificial Intelligence-Machine Learning algorithms to alert inspectors when it detects fare infractions.

A separate study carried out by Felipe González, Carolina Busco, and Katheryn Codocedo from Universidad Diego Portales on the public bus system in Santiago, Chile looked at the bahaviours of fare evaders.

They found that the factors that influenced people’s decision to pay for tickets there had to do with values, attitudes, or ideologies, but also with their perception of how socially acceptable fare evasion was considered, the presence of anti-evasion measures, and a personal commitment to staying organised and carry their travel passes with them.

In Flanders, Belgium researchers Mario Coolsa, Yannick Fabbrod and Tom Bellemans conducted a study which looked at the determinants behind fare evasion. Their results showed that fare evasion rates were impacted in a direct way by the perceptions of travellers regarding ticket prices and the probability of inspections. In socio-demographic terms, young travellers and male travellers were most likely to dodge fares.